The West building was a six-story office building, built in 1912, and located upon a portion of Block 93 in the Central Business District of Houston, Texas. Bounded by Main Street, Walker, Fannin, and Rusk Avenue, the block is centrally located and a prime office location in the central business district.

The West building, which suffered from low occupancy, was running significant operating deficits until it was purchased out of foreclosure by Davis in 1982. After its acquisition, office users were removed, operating costs were cut, and the remaining retail spaces were leased. The building operated profitably for many years until downtown retailers abandoned street level retail in preference to the complex underground tunnel system which connected major office building together in a safe, climate controlled environment.

In 2005, Davis recognized that Block 93 was a superb office site, centrally located, and close to the existing tunnel system. The site was introduced to Hines Interests, as a site where multiple land parcels could be combined, obsolete improvements scraped, and where the site could otherwise be prepared for development. The West building was razed and the site was leased to Hines Interests on a 99-year ground lease. 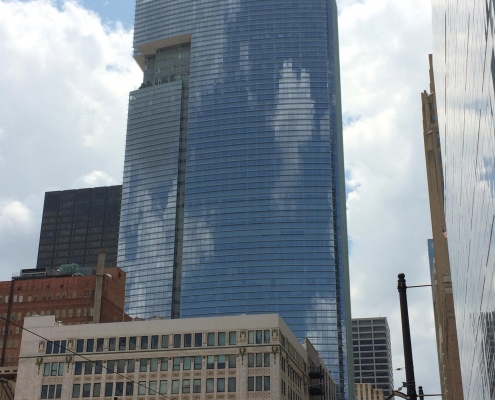